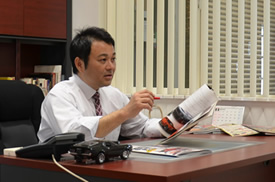 I would like to give a sincere thank you to our customers! I have been working in this field as a hobby for almost 20 years, mainly thanks to the great “love” that I have received from you.

Vintage cars are not like new cars which you can buy at any time as long as you have money. Vintage cars produced a few decades ago are unique, and you cannot find another one of the exact same kind.

Of course, the price of vintage cars in the US has been increasing, whereas the number of good vintage cars available has lessened day by day. Therefore, in order to avoid buying a wrong vintage car, which you desire to own, please consult with me about everything related to a vintage car such as “driving”, “car tuning”, “car repair”, “buying” , and “selling”. I am a master in this field; I have been always striving to meet your expectations.

I hope that Pomona company will always receive your support. 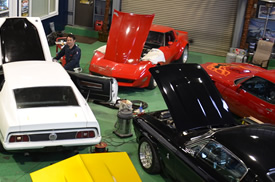 With our first priority of inheriting and preserving tradition via maintenance service of muscle cars, our company helps customers to become the owners of very well-matained classic muscle cars to gain the satisfaction only muscle cars can bring, and makes them feel more in love with the cars.

Customers will not only be satisfied with buying process, but also with our after-sales service. We are a professional team striving to keep extremely rare muscle cars in its beautiful appearance and even in a masterpiece-like state ready for showcases. 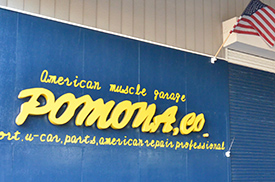 Pomona was originated from the biggest classic car show in West Coast of America, held on the outskirts of Los Angeles, California.